For those of you who follow me on Twitter and Instagram, you’ll have seen a barrage of posts from my week in Barcelona. Although set up by my university, essentially it was a week of studying, walking around for hours, getting lost on the metro and drinking cocktails and sangria until we could barely stand.

Alarm set for 4am, I was up and ready before meeting my friends at Birmingham Airport. A Wetherspoons breakfast and a 2 hour Ryanair flight later, we were in España. We dropped our bags off and headed straight onto the metro to Bogatell beach, drinking strawberry mojitos in the sun. We found a cute little restaurant and tucked into tapas before going back to freshen up where I met my Swedish roommate Ulrika. We went for a wander and found a wine bar near our residence – one of our new Belgian friends even bought us a couple of bottles of rosé… safe to say I slept quite well.

Despite the 6am start and test at the school we were studying at (yuck), the first day of classes was actually quite fun. Our tutors, Manel and Oscar, were really lovely and conducted the whole thing in Spanish so we got accustomed to speaking in the language pretty quickly. Later that afternoon we went on a walking tour of La Rambla, a (really long) street in Barcelona popular with tourists. After dinner we ended up back at the wine bar from the night before, getting a bit merry on €5 cocktails and we met some of Jess’ Spanish friends – after attempting to speak to them and the barman in Spanish, it was clear that we all needed some sleep.

Classes were interesting – I essentially learnt the imperative tense through a paella recipe… that afternoon a large group of us met up and took the metro into Barcelona, walking through Parc de la Ciutadella and trying to talk as much as possible in Spanish (my friend Stewart attempted to teach me Catalan in Spanish which didn’t go so well, bless him). I took so many photos on account that everything we saw was absolutely stunning – water fountains, the Arc de Triompf, etc. – and managed to find yet another very cute restaurant just off La Rambla. It was only Tuesday and I was starting to worry about how much money we’d been spending on cocktails and sangria…

This morning saw me teaching one of my tutors how to make curry in Spanish and ordering coffee and a croissant for a break-time snack for the third day in a row. That afternoon we visited the Institut Ramon Llull, a place that sends their staff to ‘spread the Catalan message’ – the professor who organised the trip works for them and they taught us a little bit of Catalan too. We walked in the sun towards a small café/bar in Graçia where our professor bought us all a drink. We all went for, what we called a ‘squad dinner’, in Barceloneta, before going for a drink. Dinner was cute, especially the waiter who tried super hard to make us all feel welcome by speaking in some very broken English. We ended up wandering around until about 1am with Jess’ friends again, spending €1,20 on wine (it was as vile as it sounds) and ending up in a karaoke bar where water cost €8 a glass… not cool.

After classes today, we all ventured out to visit La Sagrada Familía after a cute lunch in a Catalan bakery where I essentially over-dosed on pastry. Taking another trip to Graçia and eating the most gorgeous mango sorbet, we met up with the rest of the group and found ourselves in a tiny little bar on a backstreet in Barça, walls covered in post-it notes consisting of cute quotes, notes in every possible language and the occasional ‘call this number for sex’ messages (cheers for that one, Jordan). After again stumbling across a small but yummy little restaurant, we walked towards the metro and heard the most amazing opera singer on the way behind a cathedral… we were all stunned into silence, her voice was that incredible. That combined with a snack-fuelled chat in Jordan’s room into the early hours, it was a truly lovely evening.

I was quite sad that classes were ending today, but some of us then decided to go to the supermarket, stock up on food and have a picnic lunch in Parc de Juan Miró. After a long walk around Plaça de Espanya to find a toilet, we met up with our tutor Manel who took us on a 3 hour-long walk up Montjüic, which I think killed each and every one of us by the end of it. We all raced home, got ready and met up for dinner at a tapas restaurant by Plaça de Universitat before splitting up; while some of the girls went to a nightclub by the beach, myself and a few others found ourselves in a small gay bar in which we all got very, very drunk… so of course we thought it smart to go to a gay club (free entry is always a bonus). We essentially spent all of our money and stumbled home at 4am, but we had the best night and I wouldn’t change a thing (except maybe the amount of vodka I consumed).

What’s the best way to spend your day when you’re hungover? On the beach of course. This was after I was woken up by my roommate telling me the cleaner was attempting to kick me out of my room a day early, meaning I spent about an hour emailing and ringing one of our teachers to sort this out. Despite this, we ate our weight in Burger King, spent all day getting sunburnt on Barceloneta beach and drinking bellinis and Smirnoff Ice’s on the beach – ah, how British. We all had a cute final squad dinner at a burger restaurant, and went home for an early night after stuffing our faces on food. I managed to fall asleep watching Indiana Jones (with Spanish subtitles, of course) before waking up in a panic at 2:30am having not packed. Always leaving things to the last minute…

Vile 6:30am start, mainly due to the fact I knew I was leaving today. I woke up my (very hungover) roommate, lugged my suitcase around on the metro to give my key back before heading to the airport. After deciding the best idea was to have another Burger King for breakfast, I ended up spending €15 on the flight on a feast for me and Jess to share – having to get rid of your foreign change always has its perks, apparently. 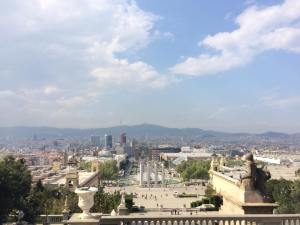 Barcelona is a wonderful place, and I spent a brilliant week with some of the most lovely people ever. I urge you all to visit – I know I’ll be going back there again very soon if I can.