If you hadn’t guessed from the very straightforward title, I spent a few days in Barcelona with my boyfriend last week. I’d not seen Jack for two months since my surprise trip home back in October, so a reunion was definitely needed! With yet another Spanish holiday came the perfect opportunity for a holiday of our own, which coincided nicely with Jack’s birthday this week, so it was an early birthday present for him too.

After getting up at 5:30am after a total of three hours sleep, I hopped on a bus to Barça and met Jack at the airport, where we then went to seek out our AirBnb. We stayed in a lovely little flat in the Eixample, a minute’s walk from Entença metro station so we could access the main parts of Barcelona super quickly, which meant we could maximise our tourist time! Our early morning travels called for a very long nap, but in the evening we took a walk down La Rambla and stumbled upon a super cute place called Ultramarinos for dinner. I don’t think I’ve ever been so hungry in my life, and the lamb chop I ordered really hit the spot. It was so weird being back in Barcelona, seeing as I’d not properly been since April last year and my visits in October mainly consisted of the airport and a couple of night’s in Siân’s flat. It was such a relief to recognise where I was and it seems I still know my way around the metro (most of the time). 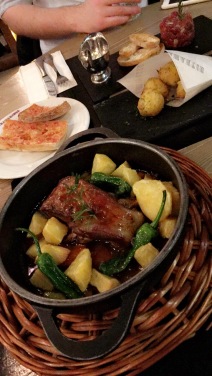 The next day we decided to have a lie in and go for brunch. If you hadn’t noticed, food is the third wheel in our relationship, and having perused Jessie and Jordan’s Instagram accounts for inspiration, we had a short walk to Cup & Cake. Luckily for us, there was a branch just ten minutes from our flat. I won’t lie, guys, but I honestly think I died and went to brunch heaven. I ordered something called the Chicken Super Sandwich and boy, did it live up to its name, complete with a syringe of guacamole (no, I don’t really understand why either). Jack ordered a delicious quinoa burger and a beetroot latte, which was far nicer than it sounds. I don’t know how we managed to stay awake for the rest of the day as we were truly stuffed, but somehow we just about did it.

Our first proper tourist stop of the trip was Camp Nou, home to Barcelona football club. Now I confess, while I enjoy football, I’m not the biggest aficionado. However, my family had visited the ground back in October and my mom was the one who raved about it most. I can see why. After a ticket mix-up, we found ourselves walking around the club museum and reading all about their gazillion trophies, star players and titles they’d won, as well as being able to sit in the stands and imagine we were there watching a proper match. I’ve not done a stadium tour since I went round St Andrew’s with my dad and brother when I was much younger but I’d have to say, Camp Nou beats it (sorry, Ian). We took lots of photos and selfies by the pitch, and by the time we went for Starbucks afterwards (YAY) I swear I could have passed out. Walking around a football ground is really tiring, folks. That night we went to a wonderful place called Surya for a curry, recommended to us by the lovely Maddie Parkin. It was my first proper curry for two months, and it was the most tasty meal I’d eaten in weeks! 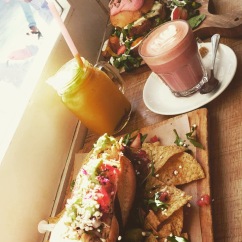 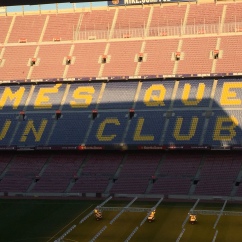 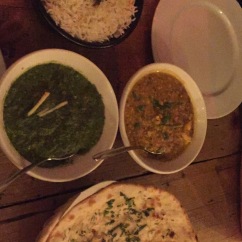 The next day I decided to take Jack on a whistle stop tour of some of the sights, meaning a lot of walking. Our first stop was Sagrada Família, before slowly walking another mile or two through the Christmas markets to see La Pedrera… there was a lot of Gaudi in this trip. After some (sadly) disappointing paella for lunch, we carried on walking down La Rambla, making sure to take photos of Mirador de Colom and El Cap de Barcelona before taking a sunset stroll through Parc de la Ciutadella towards the Arc de Triomf. We were both absolutely exhausted afterwards and had definitely earned some tapas as a treat! After dinner we went to a cocktail bar, one I’d been to on my trip with university called First Bar. Its walls are covered in post-its from customers, and weirdly we managed to sit right in front of one our group left on the wall almost 2 years ago! Crazy. 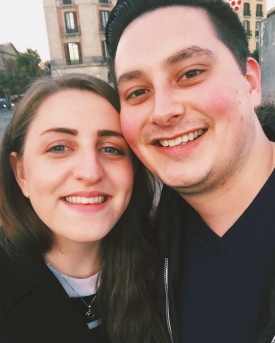 Some new memories, with some old too!

Saturday was our final day together in the city, and after introducing Jack to 100 Montaditos (which was hilarious), we walked around the food market where I had the most delicious strawberries covered in chocolate and nuts. After stuffing my face, we headed towards Plaça Espanya to see Montjüíc. I’d forgotten just how beautiful Palau Nacional really is, and after lots of photos, we took a quick wander around the art gallery at the top of the steps. I made sure to show Jack the Olympic Stadium and we walked as far to the top as we could before we couldn’t stand up straight any longer. We must have walked for miles in those few days! To celebrate the end of a short but sweet trip, we went to a super cute Vietnamese place for dinner called Bun Bo, complete with delicious food and really cheap cocktails. I’m still unsure as to how we woke up at 5am for Jack’s flight back to Birmingham the next day.

Strolls in the sunshine, and the cutest dinner spot ever

It was so lovely getting to spend some time with Jack, especially as I’ve gotten so used to seeing his face on a screen whenever we FaceTime and catch up. Plus, it was a nice excuse to get away from Zaragoza and go back to one of my favourite cities in the world! Now as I’m writing this I only have 4 more days until I fly back to England, and only 6 until I’m back in Birmingham! I am absolutely giddy with excitement just thinking about it. All that stands in my way is a few more classes at university and a LOT of packing. Wish me luck.

Hope you’re all having a lovely December, guys!

A super busy, super stressful, but super fun September (aka the best month of the year) ♍️🥂💃🏻🏡 #virgosgroove
Finally living together again - and permanently this time 🏠🥰✨
Better late than never, eh! Finally graduated (almost three years later) with a distinction in MA Magazine Journalism, alongside my lovely pals 👩🏻‍🎓🍾🏴󠁧󠁢󠁷󠁬󠁳󠁿✨
When you realise it’s actually hotter in the UK now than it was on your holiday two weeks ago 🥵 take me back to Croatia immediately pls 🌞🍺⛵️✨
The last few months at work have been so stressful but so worth it - we made a magazine! So bloody chuffed. Look at us go @sophcun 🥳🗞✨
Finally made it to the North East and it did not disappoint 🖤🤍 #hwtl
If you’re 21, then I’m practically ancient… love ya bro 👵🏻💙✨
The outtakes are always the best (and these gals aren’t so bad either) 💓💓💓 #girlband
What a weekend 💫🎡🍺🦁✨