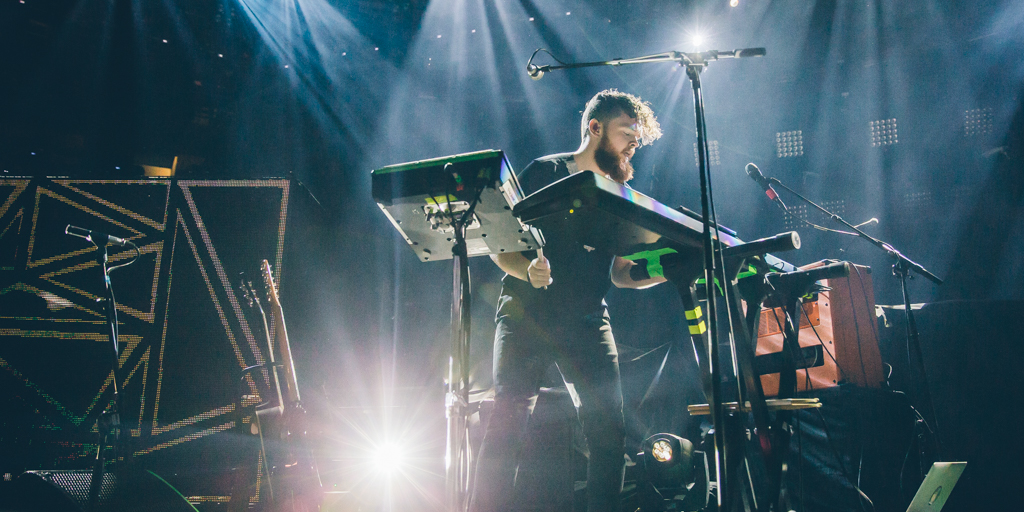 When Jack Garratt descended on Birmingham’s O2 Institute on his latest tour, the entire evening became a celebration, both of the music and the man behind it. Or should I say, the man behind the drum machine contraption set up on stage. Seeing a master of his craft perform live is a delight, and this was no exception: from the minute Garratt stepped on stage and assumed his position – drumsticks in hand, snapback in place – we knew we were witnessing the start of something special.

Beginning with ‘Synesthesia Pt. 1’, the audience were entranced immediately by Garratt and his music machine, controlling each and every sound with his loop pedal, drum machine and keyboard. Breezing through ‘Chemical’ and ‘Breathe Life’, both given the extended intro and outro treatment, Garratt made sure to welcome his crowd. ‘Are you here to have a great time?’ he posed to us, before half-shouting back, ‘I’m gonna see if I can make that happen for you’. And do that, he did. Whipping out his guitar for ‘Weathered’, a track accompanied by a choir on his studio recording, was the first time he truly shone; each and every note sounded like the album track, the Brummie crowd out-singing him on the first verse. ‘I’m not 100% sure I’ll ever get used to that’, he mused, seemingly taken aback by our passion and enthusiasm. I think he may have to get used to it sooner or later, seeing as we quickly thundered into the next lines, and continued to do so throughout the set.

Despite his enormous talents, it was evident that Garratt is still not as bold and confident as some of his counterparts in the pop charts. However, this is rather refreshing. With his debut album, Phase, having only been released in February, he admitted that he still felt awkward talking about it. Being able to share a collection of music he has spent years working on is obviously a thing to be both nervous and proud of, but the shock in how it has been received – getting to #3 in the UK charts – was hard not to notice when he addressed his rowdy fans. Playing his favourite song, and the stand out track from the album, ‘Far Cry’ (‘I know you’re not supposed to have favourite kids’), he quickly moved on to his lauded rendition of ‘7 Days/Señorita’, a mash up of Craig David and Justin Timberlake originally performed for Radio 1’s Live Lounge. This was a highlight for me, proving that Garratt is a class act and can really make a song his own, whether it be one of his singles or breathing life into a couple of mashed-up classics.

With the crowd attempting (and failing) to match Garratt on the high notes within ‘The Love You’re Given’ and the glorious light show that accompanied stomper ‘Fire’, ‘Surprise Yourself’ fell a little short. However, this was quickly remedied by set closer ‘Worry’, which was glorious to behold. With Garratt giving himself, by his own admission, ‘more shit to do’ within his live shows, by this track we had come to see him and his instruments as one, with his movements and his music flowing in unison. A tired Garratt left the stage completely astonished by the reaction he’d caused throughout the Institute’s main room – I can only imagine this reaction being even more awe-inspired when he headlines the O2 Academy in November.